We studied the immunological basis for the very potent encephalitogenicity of myelin/oligodendrocyte glycoprotein (MOG), a minor component of myelin in the CNS that is widely used to induce experimental autoimmune encephalomyelitis (EAE). For this purpose, we generated a mutant mouse lacking a functional mog gene. This MOG-deficient mouse presents no clinical or histological abnormalities, permitting us to directly assess the role of MOG as a target autoantigen in EAE. In contrast to WT mice, which developed severe EAE following immunization with whole myelin, MOG-deficient mice had a mild phenotype, demonstrating that the anti-MOG response is a major pathogenic component of the autoimmune response directed against myelin. Moreover, while MOG transcripts are expressed in lymphoid organs in minute amounts, both MOG-deficient and WT mice show similar T and B cell responses against the extracellular domain of MOG, including the immunodominant MOG 35–55 T cell epitope. Furthermore, no differences in the fine specificity of the T cell responses to overlapping peptides covering the complete mouse MOG sequence were observed between MOG+/+ and MOG–/– mice. In addition, upon adoptive transfer, MOG-specific T cells from WT mice and those from MOG-deficient mice are equally pathogenic. This total lack of immune tolerance to MOG in WT C57BL/6 mice may be responsible for the high pathogenicity of the anti-MOG immune response as well as the high susceptibility of most animal strains to MOG-induced EAE. 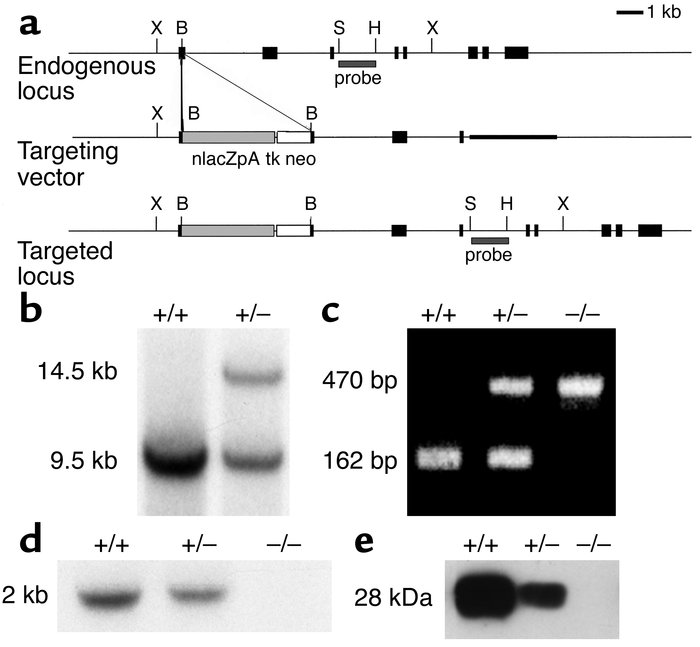 Targeted disruption of the mouse locus. () Partial restriction maps of the WT allele (endogenous locus), the targeting vector, and the expected targeted locus. The location of the external screening probe is shown. X, I; B, II; S, I; H, III. () Southern blot analysis of DNA from the parental ES cell line (+/+) and the targeted clone (+/–), digested with I and hybridized with the external screening probe. This probe detects a WT 9.5-kb fragment or a 14.5-kb recombinant fragment. () Ethidium bromide–stained PCR products from tail DNA. The 470-bp and 162-bp fragments correspond to the mutated and the WT alleles, respectively. () Northern blot analysis of RNA isolated from the brain of MOG+/+, MOG+/–, and MOG–/– mice probed for MOG transcripts. () Western blot of brain proteins from 1-month-old MOG+/+, MOG+/–, and MOG–/– mice probed with anti-MOG antibodies.